The Malice Domestic Convention in Bethesda, Maryland provides a watering hole for readers, writers and fans and of the traditional mystery to gather, celebrate this broad genre and generally have a good time. It’s always a pleasure to meet readers and since mystery fans like to travel, there were friends I’d made in Bristol and Oxford when the first Kate Shackleton book appeared. Fans are highly regarded at Malice and there is a fan guest of honour – this year, Audrey Reith.

The convention’s title is a quote from Macbeth, Act 3, Scene 2:
“Duncan is in his grave.
After life’s fitful fever he sleeps well.
Treason has done his worst; nor steel nor poison,
Malice domestic, foreign levy, nothing
Can touch him further.”

This 26th year for Malice was my second visit. It was a pleasure to renew acquaintances and to make new friends. At book signings, authors sit in alphabetical order and so last year I met Janet Bolin, author of the Threadville Mysteries and Mollie Cox Bryan author of Death of an Irish Diva. Mollie, Sasscer Hill and I went out to supper on Thursday evening. Sasscer and I were to share a panel on Saturday morning – Rosie Put Down Your Rivets: Sexism in Mysteries – so it was good to meet her ahead of time. A former racehorse breeder, trainer and rider, she writes racing mysteries.

I determined to try pancakes at least once. On Friday morning, when our panel met for breakfast, I could just about see across the top of the pile of pancakes, served with maple syrup and cream. Disappointingly, they were dry. (Conclusion: it’s best to make them at home, one at a time.) Our breakfast chat was also dry, but wittily so, as you might expect with Catriona McPherson, Kathryn O’Sullivan, Sasscer and our moderator Pattio Ruocco at the table. The panel went really well, with a full house and lots of interest in the topic. 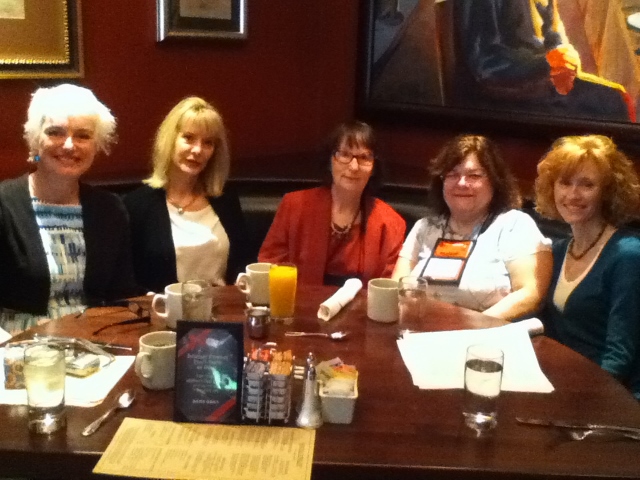 It was good to say hello to Martin Edwards (pictured). Martin was a good friend of Reginald Hill and accepted the Malice Remembers award on behalf of his friend. 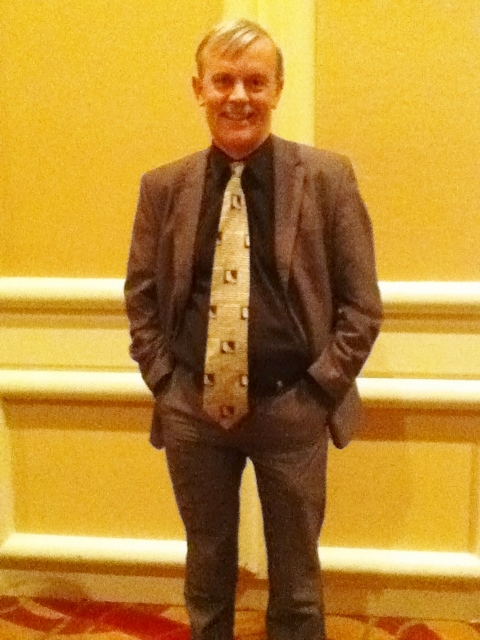 How I envy New Yorkers who are able to catch a train to Bethesda. Two such lovely writers were Annamaria Alfieri and Triss Stein. We enjoyed a meal together on Friday evening and their books are now on my to-read list, along with P M Carlson’s and the latest Charles Todd. Charles Todd is the writing team name of Caroline Todd (pictured) and her son Charles. They won the Agatha Award for Best Historical Novel, A Question of Honour. 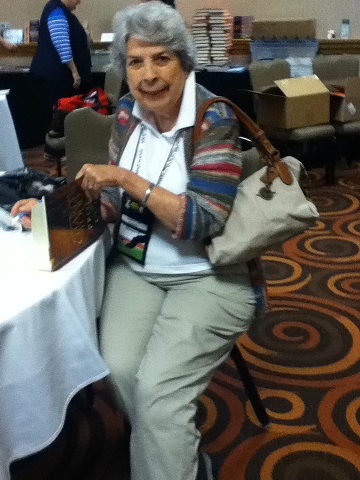 The Saturday banquet is the high point of the weekend when the Agatha award-winners are announced. A little magic dust settled around our St Martin’s Press table when Daniel Stashower won Best Nonfiction award for The Hour of Peril: The Secret Plot to Murder Lincoln before the Civil War.

The single annoyance was that I developed a sore throat the day before travelling. This might have improved but I had a long wait for my shuttle transfer to the Hyatt Regency hotel. The plane landed around 8 pm. GO shuttle picked me up at 9.45 pm, by which time I was saturated with traffic fumes. Yes, I could have caught a cab, but a combination of Yorkshire thrift and optimism (“they’ll come in a minute”) combined to keep me waiting hopefully. Having paid GO Shuttle in advance, I couldn’t thoil hailing a cab. ‘Thoil’ is Yorkshire dialect for something you could afford but can’t bring yourself to do it. On the bright side, I am now on good terms with the staff of CVS Pharmacy, Wisconsin Avenue.

On Sunday evening, in the guise of Six Deadly Dames, Marcia Talley, Mary Ellen Hughes, Sujata Massey , Elaine Viets and I visited Eastport Yacht Club. First we had supper and then talked about our work to club members and friends. It was a delightful evening. Kathy and Tom Harig of Mystery Loves Company did us proud by having our books for sale. I’m hoping at some future time I’ll be able to visit their store in Oxford, Maryland.

Our Monday lunch was at a riverside inn with a view of Mill Creek. 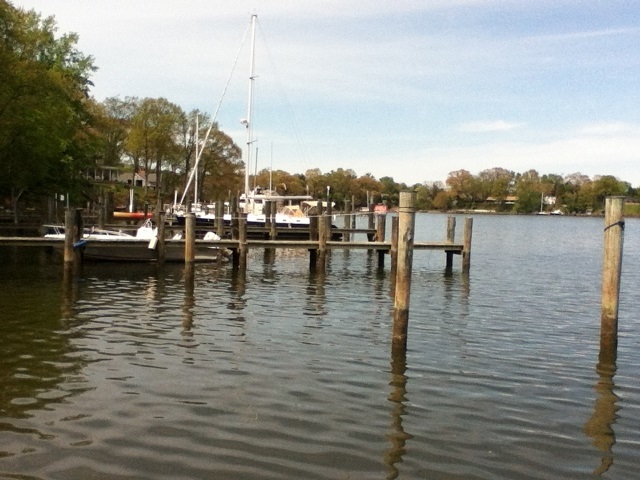 Afterwards we stopped for me to take a picture of Annapolis, from the Blue Star War Memorial look-out point. Here I am with Hank, Marcia and Elaine at the same spot. We are looking pleased and proud not just because of the enjoyable day but because Hank won the Agatha Best Contemporary Novel award for The Wrong Girl. 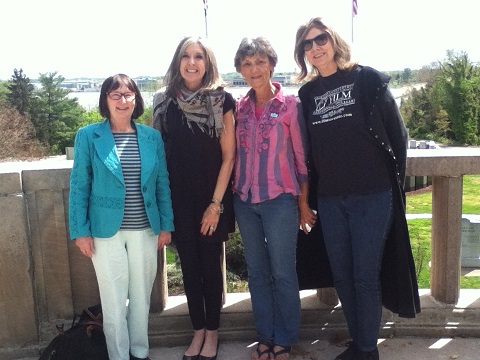 Ed and Ann Berlin welcomed us to Baltimore’s The Ivy Bookshop on Monday evening where a good time was had by all. Kristopher of BOLOBooks has kindly blogged about this event.

Having read Marcia Talley’s Hannah Ives Mystery, The Last Refuge, it was a bonus to see the setting: the William Paca house and garden, Annapolis. I congratulated myself on having pictured it so well, but really the congratulations go to Marcia for her superb descriptions. 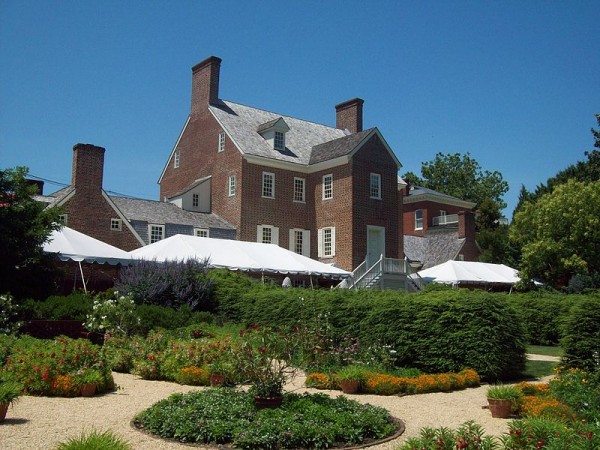 Finally, here I am as a garden gnome. The little shed is in the garden of The Annapolis Bookstore and Café. 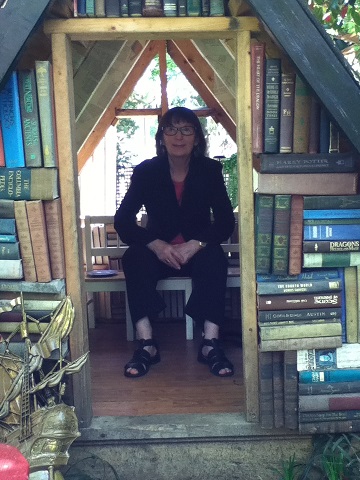