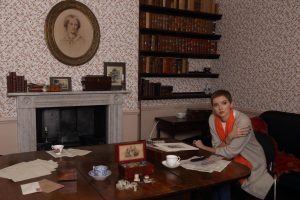 We’ve almost reached the end of the celebrations of Emily Brontë’s 200th anniversary. What better way to close 2018 than with Lily Cole’s Channel 4 documentary film, The Secret World of Emily Brontë, made with assistance from the Bradford Film Office. Throughout the year, the Brontë Parsonage Museum worked in creative partnership with Cole, literacy campaigner, model and actor. She first read Wuthering Heights as a teenager. Her fascination and curiosity shine through this engaging film, inspired by Emily Brontë’s life and work . At the start of 2018, Cole shared her thoughts with the Guardian:

“Emily Brontë, whose extraordinary novel Wuthering Heights has stirred the world for over 150 years, published her work under an androgynous pseudonym: Ellis Bell. Writing in 1850, Charlotte Brontë explained why she and her sisters Emily and Anne all used pseudonyms: ‘We did not like to declare ourselves women, because we had a vague impression that authoresses are liable to be looked on with prejudice.’

“When I was asked by the Brontë Parsonage Museum to work on a piece to commemorate Emily Brontë’s birth I immediately thought of Emily’s pseudonym, and what that gesture represented. Why could a woman not publish under her own name? What was life like for women living in the UK in the 19th century? What circumstances would also give rise to a child being found abandoned in a city in the 18th century, as Heathcliff was?”

I hugely enjoyed this short film. There is the treat of the landscapes. Cole adds the nice touch of inviting her sister to look around the parsonage. They walk across the moors and stop to chat at Penistone Crag. Cole is a good listener. She sits by the Brontë Waterfall with  a small group of people, asking for their responses to Wuthering Heights.

Steve Brown, owner of neighbouring Ponden Hall, gives us an insider’s tour of this house that was visited by the Brontës. For generations, Ponden Hall was owned by  the Heaton family, renowned for their extensive library. In later years and up to recent times, it was the home of hardworking farmers. For the people of Haworth and the surrounding area, earning a living was tough: hill farming, weaving and quarrying. Here’s a photograph of an earlier occupant of Ponden Hall, busy from dawn until dusk. 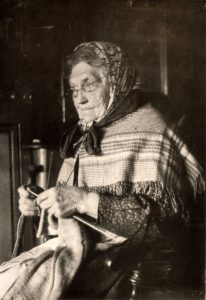 The final part of the film takes us to the Foundling Museum. There, impoverished women, and the children they could not keep, faced a life or death lottery. It’s a fascinating insight into what life might have been like for an abandoned child such as Heathcliff.

Here’s the link to Lily Cole’s The Secret World of Emily Brontë. It’s just 55 minutes long. Catch it while you can! I don’t know whether the link works outside the UK. If you are able to view, let me know what you think. For those of you who’ve read A Snapshot of Murder, I’m pleased that you’ll be able to see some of the locations.

You can also read the full text of the Guardian article here.