This was my first time at the Malice Domestic Fun Fan Crime Convention, held at the Hyatt Regency Hotel, Bethesda, Maryland. I took  the same flight as Ann Cleeves of Vera and Shetland fame. Here she is, third from left behind the table, helping to empty cartons of books to  fill over 600 goody bags. 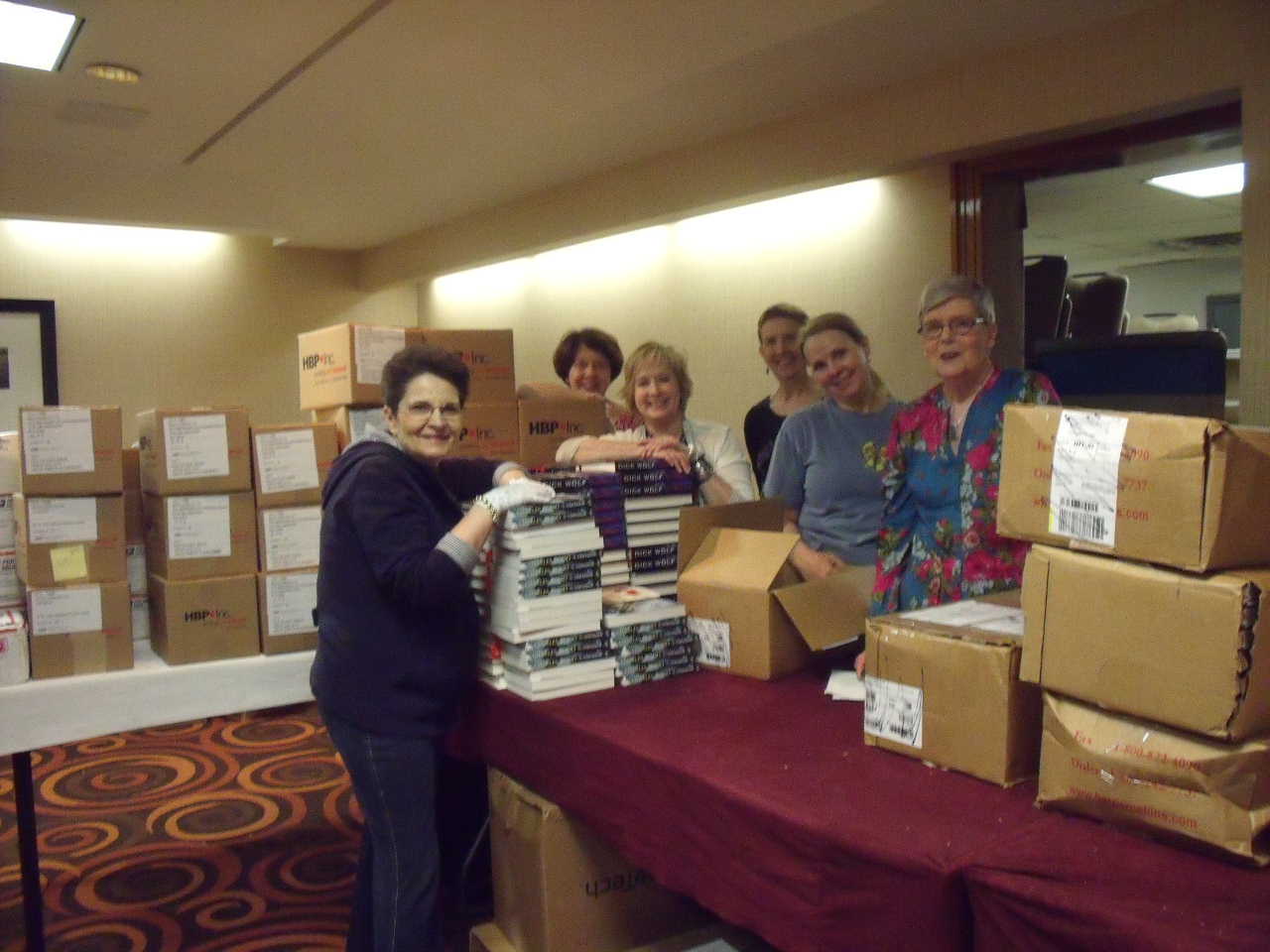 Americans treat having fun very seriously. Malice-Go-Round is a speed dating session for writers. On Friday morning authors whose names had been drawn from the hat paired up and dashed from table to table (twenty in all). We each had two minutes to pitch our books to the eight or ten readers per table. Here’s my talented pitching partner Carole Nelson Douglas in full throttle. 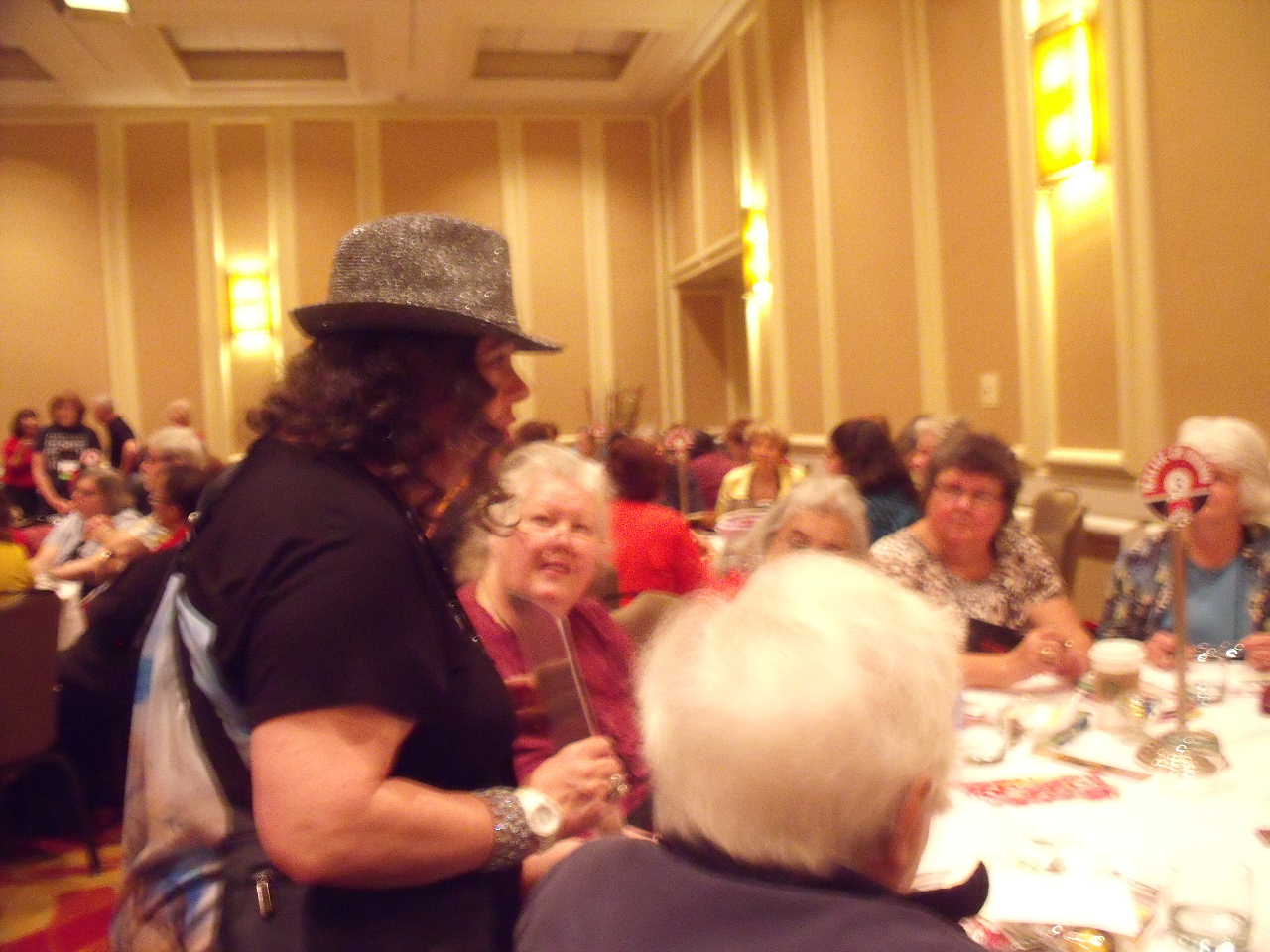 Whoever names the panels should be nominated for a Snappy and Inventive Titles Award. Mine was ‘Hup, Two, Three, Four Mysteries Involving War.’ Left to right, Moderator P M Carlson, me,  Julia Pomeroy, Erin Farwell and Elizabeth Wein. 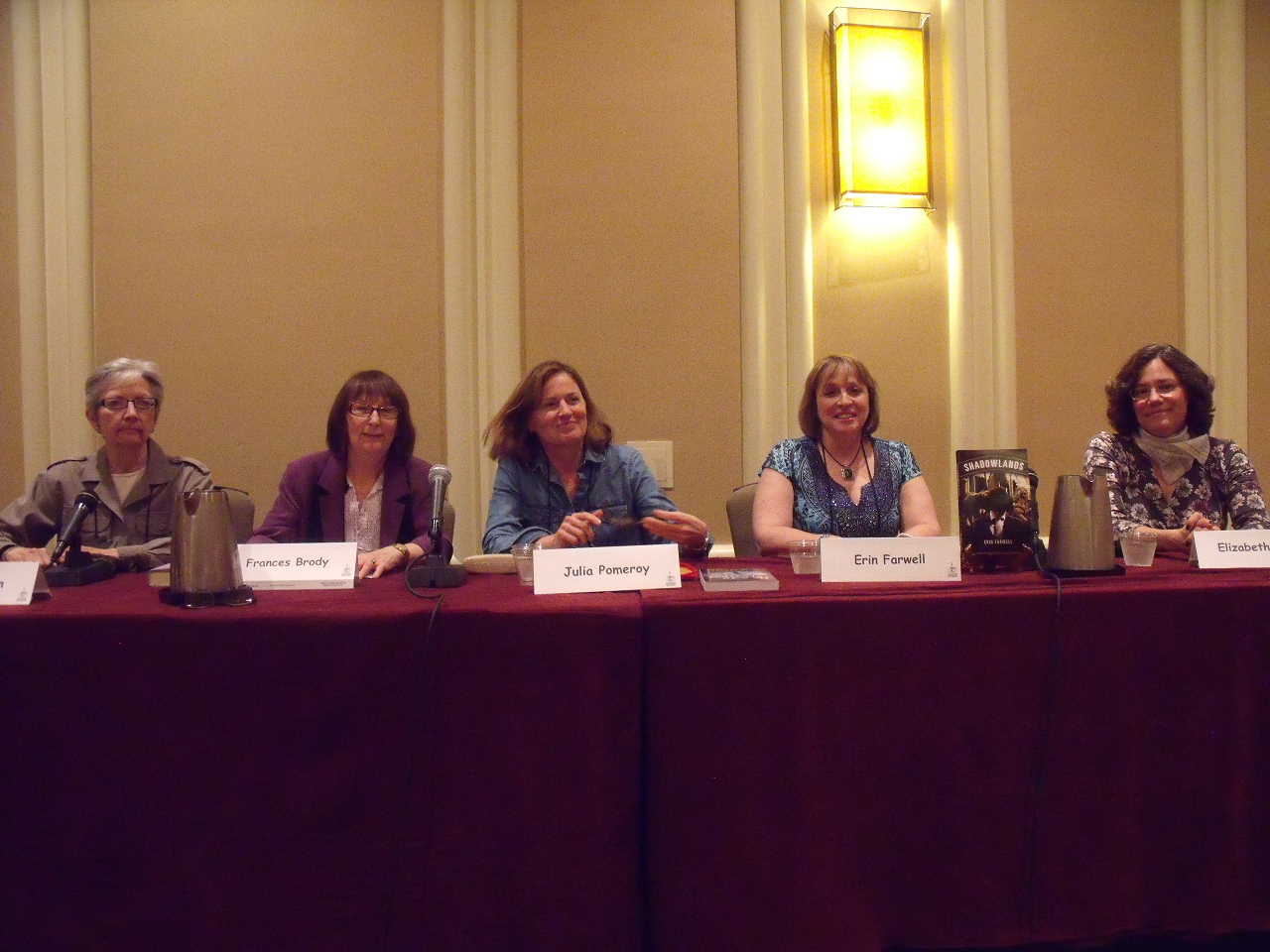 The number and sheer breadth of backgrounds to mysteries came as a revelation to me. I volunteered, alongside Les Blatt and Leslie Blatt, for two panels. That’s to say I was  on hand to fill jugs with water and hold up signs to indicate ten minutes to go, five minutes to go. The titles of these panels give an insight into the writers’ worlds: Lights, Camera, Murder: Mysteries Involving TV and Movies and Fatal Fun and Games: Deadly Hobbies. I had no idea that knitting and creating scrapbooks could teem with danger.

I helped pack the goody bags, including a copy of Mystery Scene, which I took home to read later. Imagine my surprise when my sister picked up the magazine and said, ‘Did you know you’re in here?’ She showed me my photograph and a review of A Medal for Murder by Joseph Scarpato, Jr.  Thank you, Joseph!

On Sunday afternoon Ann Cleeves, Elaine Veets and I were whisked away from Bethesda by Marcia Talley, author of the Hannah Ives mystery series, to be transformed, along with Denise Swanson, into Five Deadly Dames, shooting from the hip at a talk and signing session at Eastport Yacht Club, Annapolis. Very generous measures of wine with dinner. Enthusiastic readers. Great views. Mystery Loves Company owners and staff came along with our books, and this after they had spent the whole weekend in the dealers’ room at the Convention. 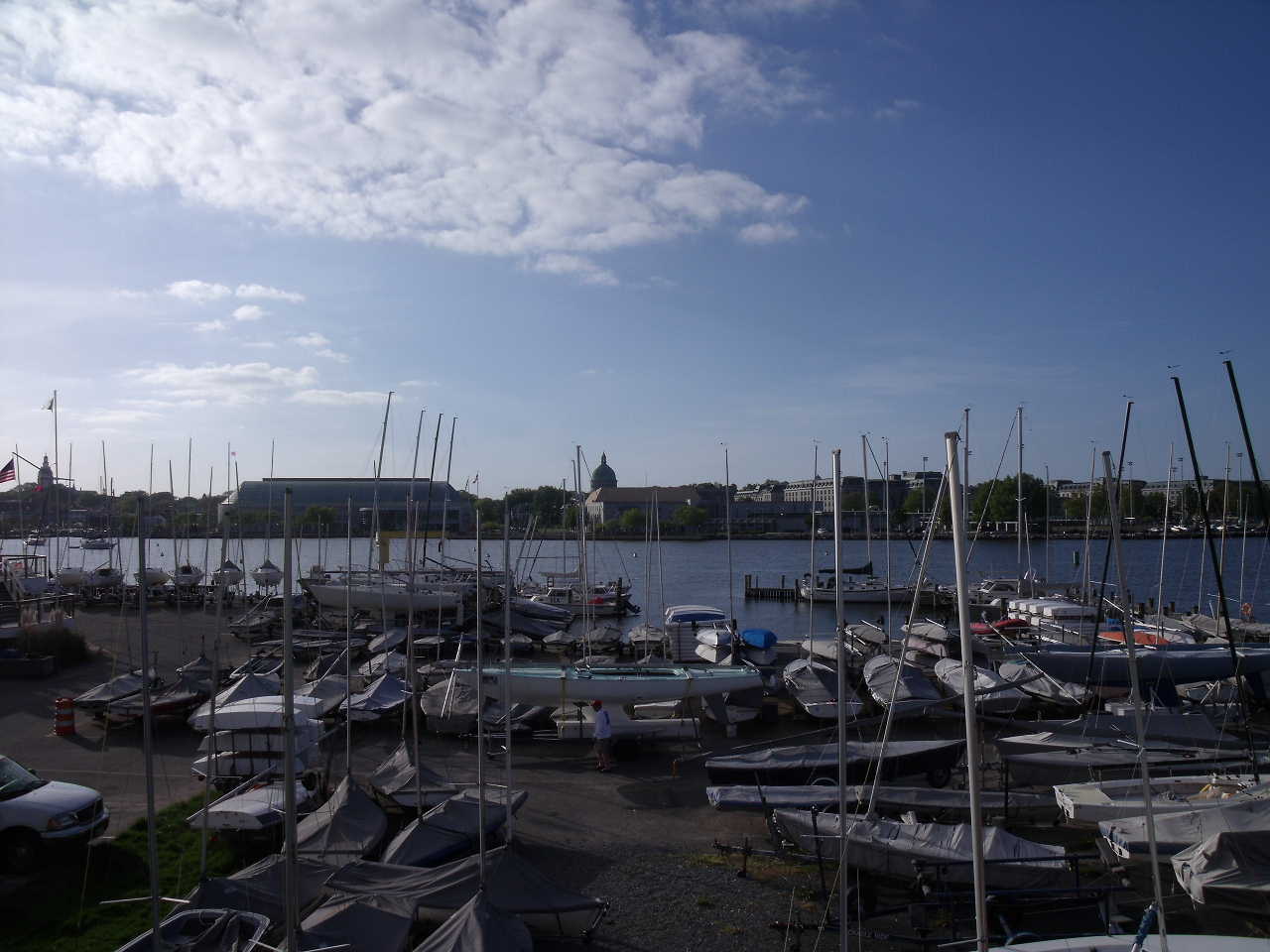 The Annual Festival of Mystery is a unique and unforgettable event organized by Mystery Lovers Bookshop, owned by Laurie Stephens. 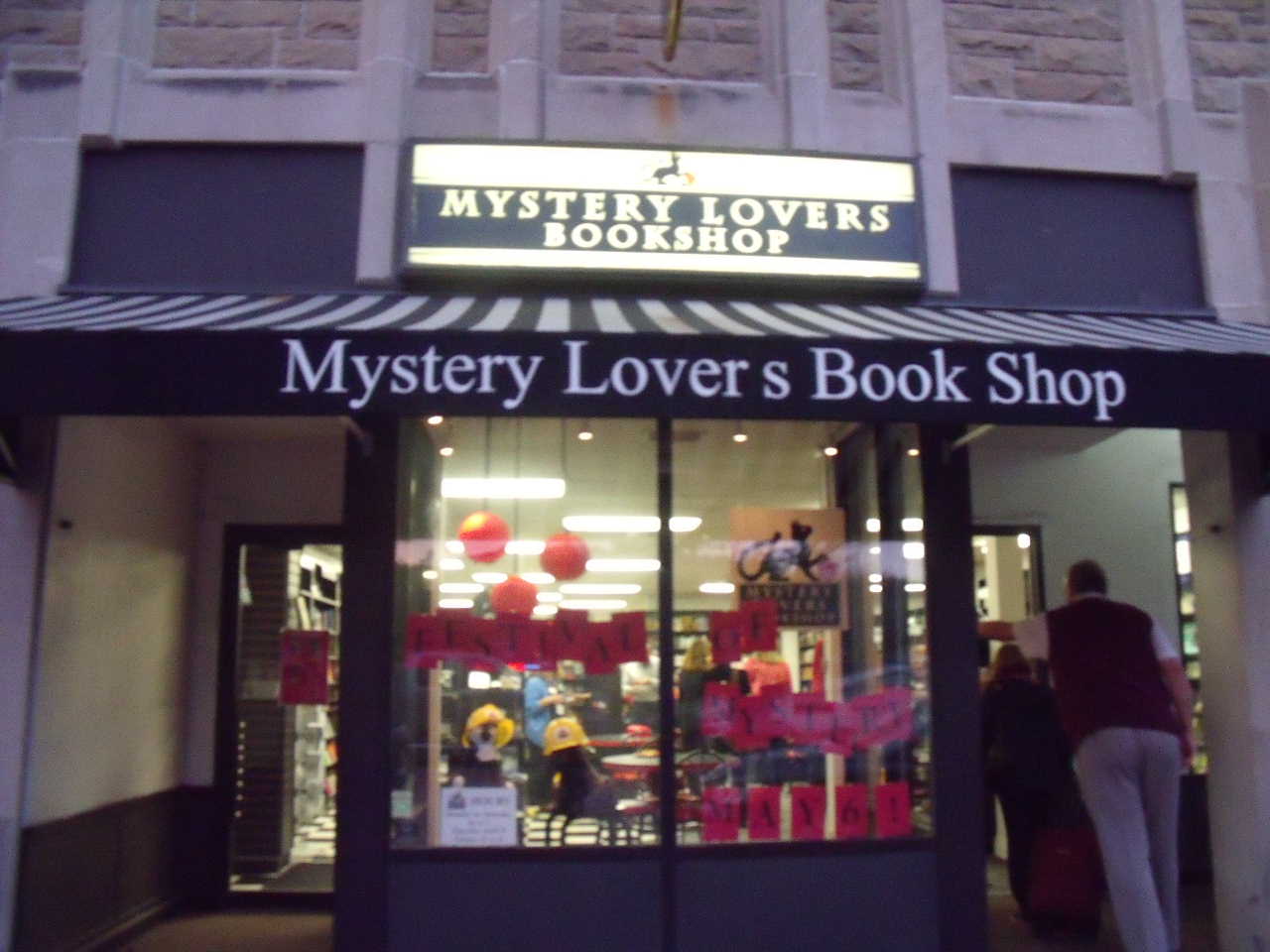 We began with tea at Oakmont Carnegie Library, followed by the Festival at the Greek Orthodox Church where hundreds of well-informed readers poured through the doors to meet forty writers, chat, have their books signed. As a first timer I was interviewed by law librarian and Mystery Scene columnist Lynne Maddox.

For the signing sessions (here and at Malice) authors sit in alphabetical order. I became friendly with writers whose names begin with B, including the charming Janet Bolin who writes the Threadville Mystery series and Mollie Cox Bryan, Agatha-nominated for the Best First Novel of 2012, Scrapbook of Secrets.
I haven’t mentioned award winners, guests of honour, the Malice 25th  anniversary book and heaps more, to be found on the Malice website along with dates for next year’s convention.