Kate’s latest adventure is A Death in the Dales. The story unfolds in the village of Langcliffe and the market town of Settle so it was fitting that the official launch – publication day, Thursday, 1 October – took place in the new Settle Library. The library is housed in a complex that provides housing for the elderly. What a good idea to live in a building with books on the ground floor. Hazel, from the library, had baked delicious cakes and scones. Some scones turn out claggy but these were perfect – as was the whole evening, with a lively audience and brilliant staff and volunteers.

I wish I were smarter about taking photographs, or asking others to do so. In Waterstones, Leeds, 2 October, there was a bumper audience and queues. I can’t show you this small triumph because I didn’t take a picture, but here’s the beautiful cake baked by Barbara. 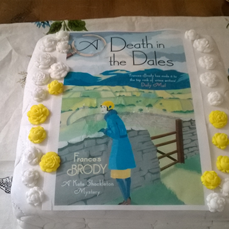 Booksellers in Waterstones, Harrogate are great promoters of the series. Here there was much chat, including with Twitter friend Pam and my retired police officer adviser and his wife. I met up with my primary school friend, Mary. She and I failed the then all-important 11 plus examination. Mary likes to tell people what a giggler I was at school. My big flaw was in not grasping that you were supposed to take school seriously, but surely I must have done something right …? Maybe not.

A clothing designer and her mother came into the store. The designer wore a beautiful tweed coat. Talented designer, if you read this, send me (a potential customer) your details.

Malton for the Ryedale Book Festival.

What a magical day! This festival is only four years old, but impeccably organized. It was great to have such an appreciative audience in the lovely old Town Hall. I also enjoyed my tour of the town, and can highly recommend the ice cream parlour. 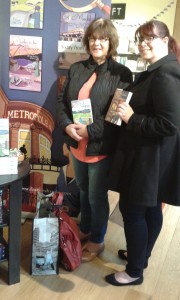 It was good to see the familiar faces of Kate Shackleton fans in Waterstones, York and to say hello to people I’d met last year and the year before. When someone didn’t know the books but showed interest, I employed my sales pitch, saying,: “Murder mysteries, set in Yorkshire in the 1920s, would you like a bookmark?” I varied this when a man approached sporting a t-shirt emblazoned with an amiable, deeply-lined face. I said, “Isn’t that Sid James on your t-shirt?” He said, “You are the only person to recognize him.” The Sid James fan didn’t buy a book, but Kate Shackleton was the day’s best-seller. I persuaded two fans to be photographed. If you read this, thank you for keeping on smiling while I spent ages faffing to take the picture.