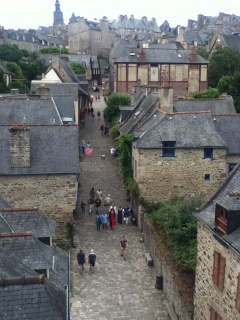 Last weekend I had the pleasure of staying in Dinan, a medieval walled town in Brittany, France, during the biennial medieval festival. Having hired a costume from the West Yorkshire Playhouse wardrobe department (what a fabulous selection) I was able to enter into the spirit of the celebrations. 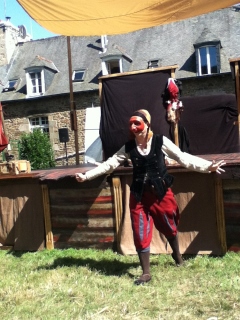 The small town was thronged with knights, apothecaries, wenches, grand ladies, courtly gentlemen, beggars, escapees from dark dungeons, babies in sacking-covered perambulators, musicians, singers, actors and hordes of excited children in authentic medieval gear. My own costume was checked for authenticity before I was allowed the green wristband by the costume controllers.

The entire medieval area of the town was given over to a rich variety of displays, events and markets including falconry, jousting, army encampments, cooking, crafts and techniques of all kinds as well as music, dancing, comedians, marionettes, juggling, sword fights and much more. 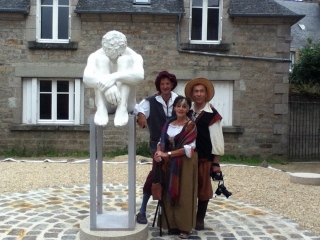 The Jardin Anglais was created as a compliment to the strong English presence in this cosmopolitan town that is a magnet for artists and crafts. I was delighted to meet sculptor Roger Vene and painter Frederic Lecaime. 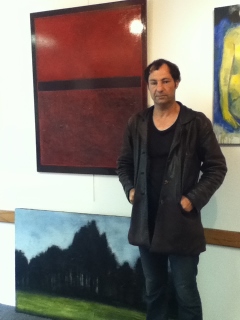 The Grande pavane which brought the two day event to a close began at 9.30 on Sunday evening, just as it was getting dark, and took over two hours to pass through streets packed with cheering bystanders – local residents and visitors from all over the world. It was headed by the new mayor Didier Lechien and his wife, splendid in blue and silver, followed by local dignitaries, the Festival committee, helpers, volunteers, giants, stilt walkers, camels, handcarts, knights on horseback, damsels and knaves – the list goes on and on and included a special contingent of those who brought their dogs. 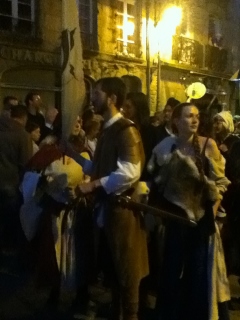 The atmosphere across the weekend was amazing. I was dazzled by the sheer vitality, colour and exuberance of this good-natured event. For the pavane, some charming roadside barmen let us stand among the beer and chips so we could see, as we had not arrived in time to find a good spot. This unforgettable event must take so much organising that the committee probably have to meet the day after tomorrow to start planning for 2016.