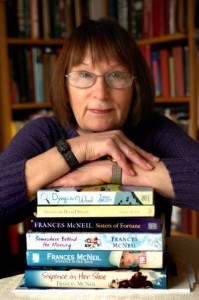 I am delighted to welcome to Bookish Jottings, best-selling author Frances Brody for a chat about her delightful sleuth, Kate Shackleton, the enduring appeal of crime fiction and where she gets her inspiration from! 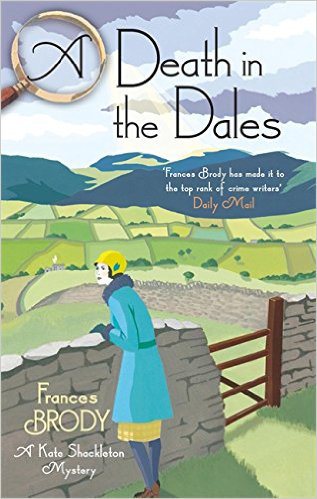 Thank you so much for joining us here at Bookish Jottings, Frances. It’s lovely to have you here. Could you please start by telling us something about yourself and the books you write?

Thanks for inviting me. It’s a pleasure to be here. My home is in Leeds, where I was born and grew up, though I’ve also lived in New York, London and Oxford. My Kate Shackleton mysteries are set in Yorkshire in the 1920s. Kate is a First World War widow, and former Voluntary Aid Detachment nurse, turned sleuth. She has a sidekick, Jim Sykes, and a housekeeper, Mrs Sugden.

You are the author of the popular historical crime series featuring your intrepid heroine Kate Shackleton. What originally attracted you to writing crime fiction?

My first “jottings” were sketches and short stories. Only one of those stories was crime, featuring a detective in Hong Kong. I was lucky enough to have my work published in magazines and broadcast on radio which was a great boost. I didn’t think about genre but simply wrote what came into my head. I then had some success with scripts for radio and television and plays for theatre. My first three published novels, partly based on family stories, came under the heading “women’s fiction” or “family sagas”. In the third saga there was a bank robbery and a murder. Dying in the Wool, the first Kate Shackleton mystery came next. Turning to crime felt more like an organic development than a big jump.

What sparked off the original idea for the Kate Shackleton series?

I had an image in my head of a man behind a high wall unable to return to his family. He turned out to be a millionaire mill owner who went missing in in 1917. Someone had to find out what happened to him. Kate Shackleton took on the task when she was approached by the man’s daughter, several years after the disappearance. The modern equivalent would be a “cold case”.

Over generations, women have had to be strong and resourceful wherever they lived. There is a particularly strong tradition of that in the north of England. Kate is partly based on real people. Her image came from a photograph in our family album. She has some of the characteristics of an elderly friend of our family, Aunty Amy. I had the privilege of spending much time with her. A child full of questions, it was good for me to find an adult who would chat back. She told me something about her life and her family. She had never married, having been responsible for the care of her younger siblings. Her brother died in the 1914-18 war.

Your stories are set in the 1920s. What drew you to this period of history?

See above! I’m sure it was partly thanks to Aunty Amy. Socially, the twenties is a fascinating period. In in many ways it’s very modern – the jazz age, picture palaces, new dances and great clothes. More people had telephones, wirelesses and gramophones. But it’s also a time of great fracture, of extreme poverty and an overwhelming sense of loss. It’s particularly a time of enormous change for women. Millicent Fawcett said that at the start of the Great War women were serfs, and afterwards they were free.

What kind of research do you do for your books?

I love to visit the locations for the stories. A Death in the Dales is set in and around the village of Langcliffe and the market town of Settle in the Yorkshire Dales. I’ve spent time there in different seasons, soaked up the atmosphere and met local people. Contemporary newspapers provide useful snippets, sometimes “hard” news but also advertisements, and announcements of what’s on at the local theatre or cinema. I read local histories. People are a great resource and usually very helpful and willing to answer questions. I’m friends with a retired police officer, an expert in poisons and the press officer of the Jowett car club – the Jowett being Kate’s motor of choice.

Your latest book, A Death in the Dales, has just been published. Could you please tell us what the book is about?

Briefly, Kate and her niece Harriet arrive in Langcliffe for a holiday. They stay in a cottage whose owner died while still regretting her failure to convince a jury that the wrong man had been charged with murder. There’s a story strand concerning a missing boy, and another to do with love letters. Harriet is determined to find the boy, brother of a girl who has become her friend. Kate and Harriet are lively and witty and the story was a pleasure to write.

If the Kate Shackleton series were to be made into a film or a TV show, which actress would you like to play her?

With so much fine acting talent around, it’s hard to name the one, so I’ll cheat and say that Harriet Walter was perfect as Harriet Vane in the Lord Peter Wimsey series. A young Harriet Walter, please!

Any advice for aspiring authors?

Read Dorothea Brande’s Becoming a Writer. Follow the tasks she sets, including her advice to write as soon as you wake. She says that any difficulties you have experienced in writing are not technical but come from the inside. Her advice is specific and helpful.

Something I found useful, when holding down a full time job, commuting and juggling family commitments, was to analyse the pattern of my week, pick the hours available for writing and draw up a timetable.

What’s next for Frances Brody?

I’m about a third of the way through a draft of the eighth Kate adventure. My breaking news – bit of a thrill for me here!  – is that the three sagas I wrote as Frances McNeil will all be re-published in 2016 as Frances Brody novels, starting in January with Sisters on Bread Street.

Thank you so much for chatting to me, Frances! If you want to know more about Frances and her wonderful books, visit her website at www.francesbrody.com or on her Facebookand Twitter pages. Frances’ latest Kate Shackleton mystery, A Death in the Dales, is on sale now from all good bookshops and online retailers.

This interview is is taken from the Bookish Jottings website. The original can be found here https://bookishjottings.wordpress.com/2015/11/29/an-interview-with-crime-writer-frances-brody/

The Bookish Jottings review of A Death in the Dales can be found here https://bookishjottings.wordpress.com/category/reviews/