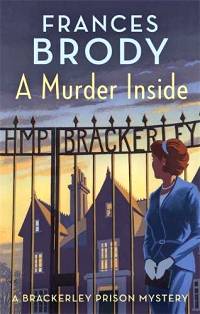 A job in the Prison Service is not for everyone. The training is hard, the cells are bleak and a thick skin is needed.

But for Nell Lewis, helping prisoners is something she cares about deeply, and when she's promoted into a new post as governor of HMP Brackerley in Yorkshire, she's tasked with transforming the renowned run-down facility into a modern, open prison for women.

Just as Nell is settling into her new role, events take a dark turn when a man's body is discovered in the prison grounds. The mystery deepens still when one of their female inmates goes missing, ensuing a search across the country.

Can Nell resolve the sinister happenings at HMP Brackerley, before anyone else is put in danger?

"Frances Brody has come up with a great setting for her new run of crime novels, written in the traditional style ... a competent, dynamic and likeable heroine, and an environment packed with stories great and small ..."

"...the start of an exciting new series."

The Times Crime Club included A Murder Inside in their favourite picks of the week, saying " it has a charm, and mystery, all of its own".

A Murder Inside was published by Piatkus Books on 28th October 2021 in paperback, Kindle and audio editions.