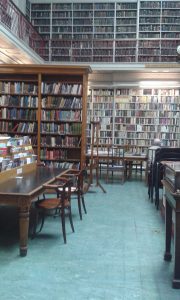 Last weekend, I had the great pleasure of taking part in Newcastle Noir at the Lit&Phil Library.  This hugely enjoyable festival is in its second year and attracted high calibre writers along with enthusiastic and informed readers and bloggers. The organisers, Jacky Collins, Kay Easson and Ariane Bogain put together a fine programme including authors from Iceland, Finland, Norway and Mexico. Ann Cleeves was first on. There was naturally much interest in the Vera and Shetland books that have been adapted for television. Ann also talked about her work in support of libraries. This year sees the publication of her thirtieth novel.

The setting was perfect. The impressive Lit&Phil, founded in 1793 and in its present  premises since 1825, is the largest independent library outside London. The splendid reading rooms are open to non-members who can pop in for a cup of tea and a good read.  What I didn’t know was that this was the first building in the world to have electric lighting.

My panel was Historical Crime, shared with Clare Carson  and Kate Griffin chaired by 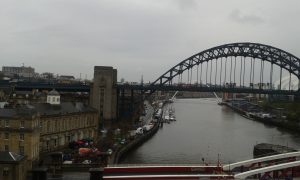 crime reviewer and Shotsmag blogger Ayo Onatade.  I’d met Ayo and Kate before so it was good to see them again, and to meet Clare whose first novel, Orkney Twighlight, was published in 2014. It’s part old-school spy thriller, part family drama and part Norse mythological adventure. Both Kate and Clare have interesting tales to tell so do look them up. Kate writes the Kitty Peck Music Hall series set in the East End of London. Kate and Clare’s books are set at in the 1890s and the 1980s. History? Well, it is now. I  feel so at home in the 1920s that it seems like yesterday.

As well as exploring the Lit&Phil, I took the guided tour of “Murderous Newcastle” and heard grisly tales of body snatching, poisonings, public hangings and murders – real and as imagined by local authors.

A bonus for me was to stay on an extra day with friends. We visited a riverside park, 14th Century Lumley Castle and Beamish Hall, a 12th Century manor house. Lumley Castle and Beamish Hall were dressed up ready to host weddings at four o’clock. The morning was grey and miserable but the sun obligingly put in an appearance around lunchtime and so brides, grooms and guests would have enjoyed a sunny afternoon.

Here are some of my pictures. Don’t be misled by the knight in shining armour. His suit is empty. 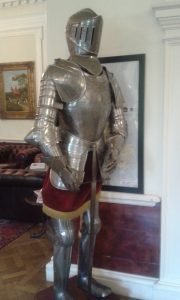 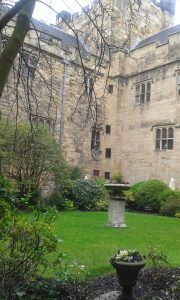 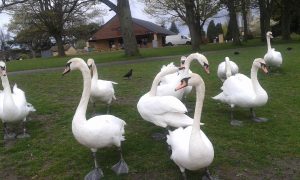