An English friend who lives in Brittany met me off the train at the Gare du Nord. Armed with passport photos, we bought passes that enabled us to hop on and off buses for the duration of our stay.  Everyone who has visited Paris has a favourite spot and so I arrived with tips aplenty about where to go and what to see.

Having just three full days, we planned to concentrate on particular areas and began with coffee at Café Carette in the Place des Vosges. Here’s Shirley posing in the square. 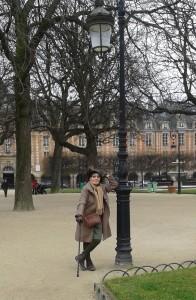 Twenty minutes later, as we threaded our way towards the Jewish Quarter, her mobile rang. On a poor line and with misunderstandings, she was asked had Frances McNeil lost her passport. I looked for the wallet on a strap that hung around my neck. The strap dangled uselessly, minus its treasure, the miserable buckle having coming undone. It held my passport, return tickets, money and cards. Fortunately a young Russian boy found the wallet and took it to his parents who spotted my note of Shirley’s French mobile number. I was very grateful for their kindness and honesty. The little boy shone with pleasure and pride at coming to my rescue – a true hero of Mother Russia.

The Picasso exhibition was a revelation. I had no idea of the sheer range of his work, the sculptures and the variety of painting styles. It surprised me that photography was allowed and I took pictures of Pablo’s chair and the delightful “A Child Playing With A Toy Truck” but I’m sure I’d be breaking copyright law if I showed them to you.

We were in the 11th arrondissement and so very glad of our bus passes, and triumphant when we found the right bus. My favourite trip was on the number 24 that took us along the left bank with views of the islands, Sainte-Chapelle and Notre-Dame. After our sightseeing, we went to Printemps Department Store for lunch in the Cupola Restaurant. 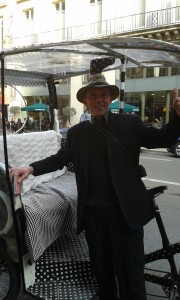 We intended to walk along the Champs-Élysée and through the gardens but instead hailed a cycle rickshaw, daringly operated by a charming Greek who took us to the Arts Decoratifs Musée via the Élysée Palace, passing dangerously close to heavily armed police. I had hoped to see 1920s outfits that Kate Shackleton might add to her wardrobe but this museum doesn’t have a permanent costume display. A snapshot from the gardens of the Louvre is the nearest I came to the seeing the Eifel Tower, though I did buy the key ring.

On our last full day we walked through the flower market and around the cobbled medieval streets of the Latin Quarter. It would be easy to spend a day on the Île de la Cité which my guide book tells me is not only the heart of Paris but the heart of France. One of my favourite spots was the peaceful Île St-Louis blissfully remote from from the bustle of the traffic and with great views of the river and the city. We also explored some of the island’s quirky shops. 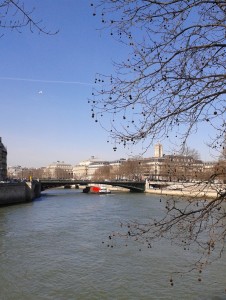 Among the recommendations of places to visit was the Canadian bookshop, which I think is The Abbey Bookshop on the rue de la Parcheminiere. Unfortunately, I didn’t manage to find my way there (next time!) but we did call at Shakespeare and Company. Here’s David with a copy of Death of an Avid Reader. 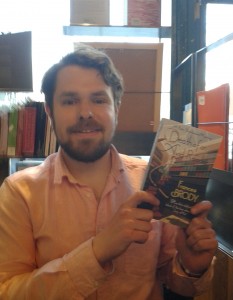 The final morning was set aside for the Pompidou Center but Shirley woke in the middle of the night with the terrible realization that she’d bought the wrong colour shoulder bag. We went back to the shop in Île St-Louis to exchange it. More intrepid travellers would have squeezed in extra sights but footsore and with more than a touch of flu, we sat in a café watching the world go by while Shirley regaled me with tales of her early life in the theatre. So much I didn’t see and do, but all the more reason to go back again.