This year marks the four hundredth anniversary of the trial, at Lancaster Assizes, and the execution by hanging of the Pendle witches. Like many writers I was inspired by this story and it formed the subject of my first BBC radio play. 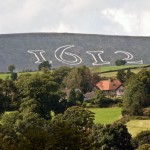 My fascination with the story began when I was a student at Ruskin College, Oxford, studying the seventeenth century. One impressive author had charted years of good and bad harvests across Europe. He found a connection between the economic effects of bad harvests and accusations of witchcraft. In times of hardship, this historian argued, better-off people were disinclined to bestow charity on the poor and outcast. At such times, accusations of witchcraft against marginalised individuals increased. I do not remember the author’s name or the title of the book, but it sent me scurrying to learn more. 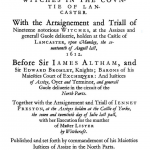 In the domed reading room of the British Museum (haunt of Karl Marx, Oscar Wilde and Bram Stoker), I read Thomas Potts’ vivid account of the trial. The majority of the accused were members of two desperately poor matriarchal families headed by Demdike (Elizabeth Southerns), who was almost blind, and her rival, Chattox (Anne Whittle). The families begged, or earned their living as best they could. In court, they boasted of their ability both to harm and to heal – cattle or people. The odd one out among the accused was a gentlewoman, Alice Nutter.

The story begins simply enough, when Alison Device curses a pedlar who refuses to show her his wares, probably because he knows she cannot buy. Shortly after, he suffers a stroke. When challenged by the pedlar’s son to lift the curse, the penitent Alison admits her guilt. The magistrate investigates, and the process of arresting women, and a slow-witted man, begins. Crimes against people and animals are discovered. A black dog makes an appearance. Jennet, a nine year old, testifies against her family and gives an incriminating account of their doings at Malkin Tower. Jennet’s mother rails at this shocking betrayal.

Half blind Old Demdike, who escaped hanging because she died in Lancaster gaol, gave me the title for my play: THE SUN AND THE DEVIL. She told the court how one fine evening, when sitting outdoors, first she saw the sun, and then she saw the devil.

Many writers have been inspired by this heartbreaking tale and in this anniversary year there is much to impress. I had always hoped to return to the story, but Kate Shackleton’s investigations keep me busy.