SISTERS ON BREAD STREET    SIXPENCE IN HER SHOE    HALFPENNY DREAMS 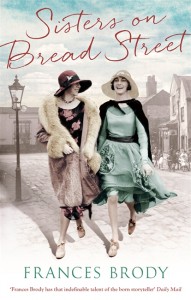 These three novels were first published before the Kate Shackleton books, under my own name, Frances McNeil.

Sisters on Bread Street draws on stories from my mother Julia’s life.  Born in Leeds to a German Jewish father and an Irish Catholic mother, she was orphaned at the age of eleven. Her aunt, her mother’s sister, had also died. Julia and her sister were taken to live with their kind uncle and cousins. Uncle Tom was landlord of a city centre public house.

In the novel, Julia is older than she was in real life and so able to shape events in a way that the real Julia could not.

It took me a long time to write the book. First I tried writing a factual account of my mother’s life but my efforts did not do her justice. I was so very slow in writing that I eventually self-published the novel. This was because by the time it was finished, Julia did not have long to live. She read the manuscript weeks before her hundredth birthday. ‘It reads like a dream,’ she said. In fiction I could capture the mood and feelings that were out of reach when I had tried to write the story as biography.

Before she died, Julia held a copy of the printed book. ‘Will it be successful?’ she asked. What could I say but, ‘Yes’.

A couple of years later, Sisters on Bread Street was commercially published as Somewhere Behind the Morning. I am happy to reclaim the Bread Street title for this new edition. Bread Street was a real street off York Road, between Wheat Street and Apple Street, now the site of Ebor Gardens Primary School. 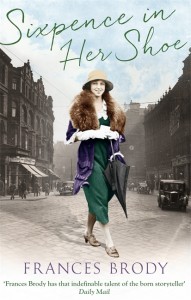 In Sixpence in her Shoe, Jess’s little goddaughter, Leila, is orphaned. Jess decides to keep her from the orphanage. If this means parting company with her own family and her sweetheart, she will do it. One of the settings for the story is Silverdale, a spot overlooking Morecambe Bay, now designated an area of outstanding natural beauty. Silverdale was the location chosen in the early days of the last century to house a holiday camp for poor children from Leeds. For one hundred and twelve years underprivileged children have been sent there for respite breaks. I was sent there myself in the 1950s but that’s another story.

One more saga followed: Halfpenny Dreams, set in the 1930s. This novel was first published as Sisters of Fortune but because of reverting to the title Sisters on Bread Street, it was thought it best not to have two titles with the word Sisters. 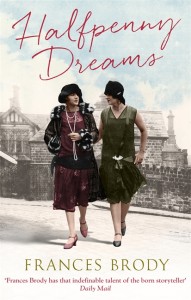 My idea was to write something inspired by an area of Leeds called “the Bank” where the poor Irish made their homes and built their church. The way into the story eluded me until one day I was speaking at a lunch. The elderly woman beside me introduced herself. “I am the daughter of Becketts Bank,” she said. Becketts Bank was one of the last private and family banks in the country.

Up stepped Kate Shackleton, elegant, resourceful and a delight to write.

Sisters on Bread Street and Sixpence in Her Shoe out now